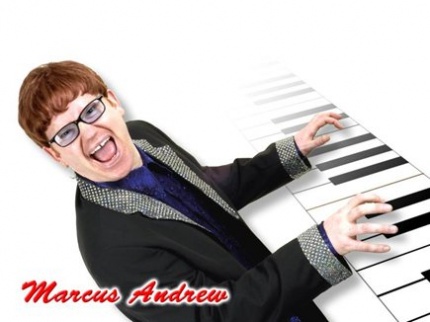 Tribute Acts Marcus Andrew as Elton John
Maruc Andrews has been performing as Elton John for over 6 years, including TV appearances on 'Stars and their Doubles' the IT Crowd as well as appearances as himself on Doctor Who, Casualty and Mayo. His look, vocals and mannerisms are uncanny, creating a fully believable illusion of the Man himself! Marcus works extensively throughout the UK and Internationally perfornming at some of the best venues around and working with many of the top fellow look-a-likes such as Garry Pease (Rod Stewart) who teams up with Marcus as 'The Rod & Elton Show'. Marcus arrives totally self contained with lighting & lasers, sound, and authentic costumes performing over 20 of Elton's greatest hits alone or with a Live Band to create a show with the unique style and performance of the legendary showman!