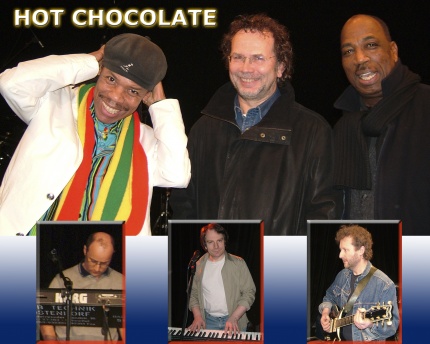 Hot Chocolate formed in Brixton, London, England in 1968. Members of the group included Errol Brown, Tony Connor, Larry Ferguson, Harvey Hinsley, Patrick Olive and Tony Wilson. In 1969 the band started working on a reggae version of the John Lennon song "Give Peace A Chance". Errol Brown had changed the lyrics for their version but was informed that he could not do this without John Lennon’s permission, so a copy of the demo was sent to the Beatles Apple record label to see what they thought of it.

Fortunately, John loved the version and it was released on the Apple label. The group was given the named 'The Hot Chocolate Band' by a secretary at the company, Mavis Smith, the band later changed it to just 'Hot Chocolate'. Towards the end of 1969 Mickie Most signed Errol and the cofounder of the group Tony Wilson as writers and recorded their songs with Mary Hopkins, Julie Felix and Herman's Hermits before encouraging them to come up with a song for themselves.

In 1970 Hot Chocolate, with Errol Brown as lead singer, released their first record entitled "Love Is Life" which reached number 6 in the charts. This was the start of a fifteen year career for the group who amassed a total of over 30 hits and also became the only group in the UK to have a hit for fifteen consecutive years. In 1981 Hot Chocolate had the honour of being invited by Prince Charles and Lady Diana at their pre-wedding reception at Buckingham Palace which was attended by heads of Government and many members of European Royalty.

In 1986 Errol left the band and took time out to spend more time with his wife and then young children. The rest of the members of Hot Chocolate also took some time off to consider their future and in 1992 Patrick Olive, Harvey Hinsley and Tony Connor joined up with agent Richard Martin and decided to start touring again. The band found a new singer Greg Bannis and keyboard players Andy Smith & Steve Ansell. Since 1992, the band has enjoyed years of continued success touring all around the world performing to many thousands of fans who love the music of Hot Chocolate.

In 1997 the classic single "You Sexy Thing" reached number one in the charts after it was featured in the movie 'The Full Monty' and a new Hot Chocolate 'Greatest Hits' compilation released in October 1997 reached number 10 in the album charts. In 2010 singer Kennie Simon replaced Greg Bannis on vocals creating what many are saying is the best sound ever.