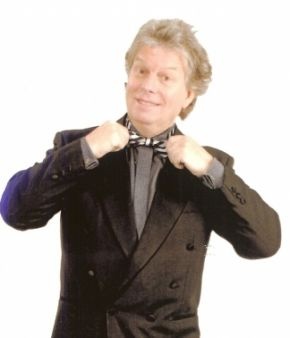 The new century has been a great time for Ollie as he has won not just one but three comedy awards adding to his long list of achievements in the world of comedy. Ollie has built a solid reputation as a reliable funny man who always gives 100%. His off stage manner and demeanour makes him great company in a social situation. His T.V. credits include 7 consecutive appearances on Granada T.V.’s original “The Comedians”, Scottish T.V.’s “Patter Merchants”, South West T.V.’s “15/40 Show” With Nick Owen (Ollie was asked back 3 times – something of a record!).

In his rock ‘n’ roll days Ollie was the drummer with cult band The Idle Race that also featured Jeff Lynne of ELO fame. At this time Ollie was known as Roger Spencer and Ollie was a nickname that has stayed with him. He has remained firm friends with Jeff Lynne. In his career Ollie has done so many varied things including Rock ‘n’ Roll bands working with many major bands i.e. The Beatles, The Who, Fleetwood Mac, Moody Blues and of course ELO (which in the early days also featured Roy Wood) etc. In 1980 Ollie left the music scene and his solo career took him into T.V. working as a “warm-up man” on Tiswas & The Premiership, The Eamon Holmes Sports Programme and on shows featuring Jimmy Cricket, Gary Wilmot, etc. Ollie has become a very popular after dinner comedian, with his easy delivery of both observational and topical material.

His scrapbooks are full of many memories of some of his fellow speakers from Jonah Loma to Jack Charlton, Best to Law, Bayfield to Cowdrey, Willy John McBride to The Honourable Dennis Howell plus many, many more. Ollie is a great asset to any occasion and looks forward to helping to make your function a memorable one.