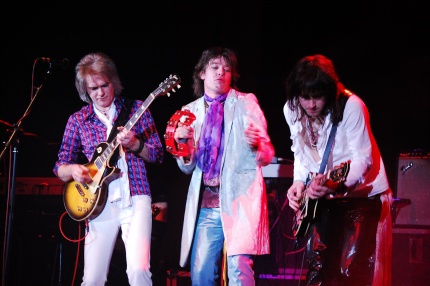 The legendary Rolling Stones were formed in London in 1962. The original line up of Brian Jones, Mick Jagger, Keith Richards, Charlie Watts and Bill Wyman was later added to, first by Mick Taylor and then by Ronnie Woods, both in turn replacing Brian Jones. Universally known as 'The Greatest Rock and Roll Band in the World', they have sold over 200 million albums worldwide, with hits such as 'Satisfaction', Start Me Up', Honky Tonk Woman' and Jumpin' Jack Flash', to name but a few - all known the world over. Now 'The Stones' bring to the stage all the energy and excitement of a live Rolling Stones concert.

This is not a 'tongue in cheek' approach, but a serious tribute to their music. The greatest tribute band in the world pays tribute to the Greatest Rock and Roll Band in the World. The current line up of the Band and the Rolling Stones member they most represent is: Ben - Vocals / Harmonica/ Percussion - Mick Jagger Richard - Guitar/Vocals - Keith Richards. Jason - Guitar / Vocals - Mick Taylor Steve - Bass / Vocals - Bill Wyman Wayne - Drums - Charlie Watts JBlack - Keyboards / Guitar / Percussion / Vocals / Nicky Hopkins Their repertoire covers songs from all periods of The Rolling Stones career, but the majority of songs are from the 60's and 70's