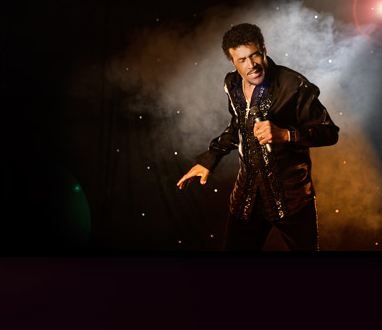 Hamilton Browne has created one of the most in demand tribute shows around today. His uncanny resemblance and vocals simularities to the legend of Motown are second to none. Hamilton has performed as Lional Richie in many of the UK's leading theatres and venues including the Hilton, De Vere and Renaissance hotels. Due to the International high demand for this act, hamilton spends a large part of the year in Europe and the Caribbean working on popular cruise liners.

Before embarking on his tribute show, Hamilton used to perform with greats such as The Four Tops, Percy Sledge, The Detroit Emeralds and Odyssey performing on his massively successful Sounds Of Soul Show and worked with world famous Trevor Chance's Legends Show in Blackpool, UK. Hamilton performs this show alone with playback or accompanied with dancers and a live band, either show will have you and your guests Dancing On The Ceiling!