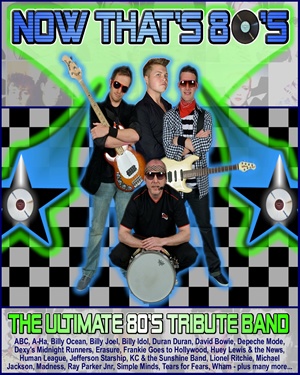 Now That's 80's are a fresh three or four piece 1980's tribute band who aim to take you 'Back in Time' to the decade where men wore more make-up than the women, cross dressing was fashionable and the mobile phones were bigger than your average house brick! With a reputation as one of the hottest bands around, self-confessed 80's music lovers defy any audience to sit still for longer then the opening number. Covering music from A-Ha, Bon Jovi, Duran Duran, Frankie Goes to Hollywood, Lional Richie, Michael Jackson, Madness, Queen, Wham and many more. The band come totally self contained and ready equipped for your event, wedding or party.