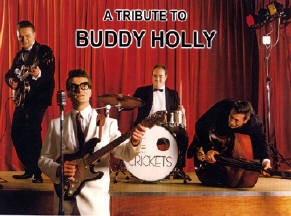 Marc Robinson's Counterfiet Crickets have established themselves as the No1 Buddy Holly tribute band in the UK, success quickly followed across Europe. The sound produced by the band is completely authentic and emulates those authentic recornings of Buddy Holly and the Crickets. The percussion on "Everyday" is played by the drummer slapping his knees, and "Not Fade Away" is played on a cardboard box as were the originals.

The whole band perform in full Crickets attire. Marc's uncanny resemblance to Buddy is further enhanced by the horn rimmed specs, Fender Strat and a voice as close to Buddy's as is surely possible!