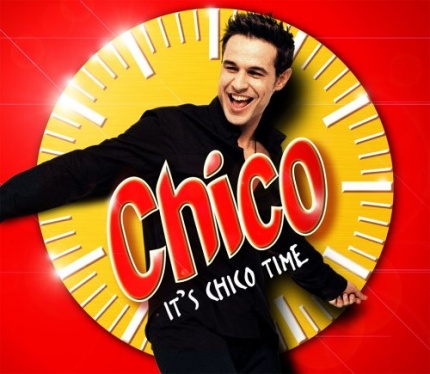 Chico’s kind heartedness, generosity and sheer talent captivated the nation with his incredible showmanship in jumping into Sharon Osborne’s pool with a live microphone to amazing dance routines and vocal performances which stunned the wildest rock & roll star in history Mr Ozzy Osborne. Following the show it came as no surprise when his first single Chico Time knocked Madonna off the top of the charts for his first number 1. The world has been his oyster ever since and he has been on all the top TV shows.

He has been the face of Nickelodeons’ anti-bullying campaign, received rave reviews as Aladdin, and Jack in Jack and the beanstalk playing to record breaking runs in Brighton, Darlington, Hull, and Rotherham Civic theatres. He notched up a ‘Blind date’ with Dame Edna Everage, and written a feature film script, ‘Lunchbox’ in which he co-stars with his brother JC Mac . The pair also wrote, produced and starred in the short film ‘Winner Takes All’ which received a BAFTA nomination and was in the official selection of over 40 film festivals worldwide.