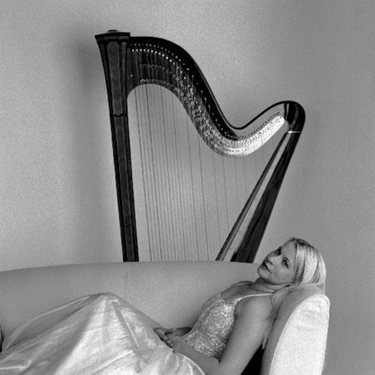 After attending a concert at the age of 3, Maxine decided there and then that she wanted to play the harp, she also began to play piano at age 4 and was given plenty of encourangement by her parents who were both in Halle Orchestra. She went on to study under renowned harpist Elinor Bennet at Chethams School of Music, Maxine was 10 when she won her first music festival and aged 15 when she performed her first concerto (Mozart Flute and Harp). At 16 she debuted in a concert at the former Freetrade Hall in Manchester.

Maxine has persued a busy freelance career since 1989 with some of the UK's leading Symphony, Opera and Ballet Orchestras including the Halle, opera North, National Symphony Orchestra, English National Ballet, City Ballet of London & Moscow City Ballet. Maxine also pursues a solo career performing Concertos and Recitals, she has performed for Royalty and with a range of celebrities such as Russell Watson and Kanye West.

Maxine can combine the beauty of the harp with the flute as part of her Melandra duo.