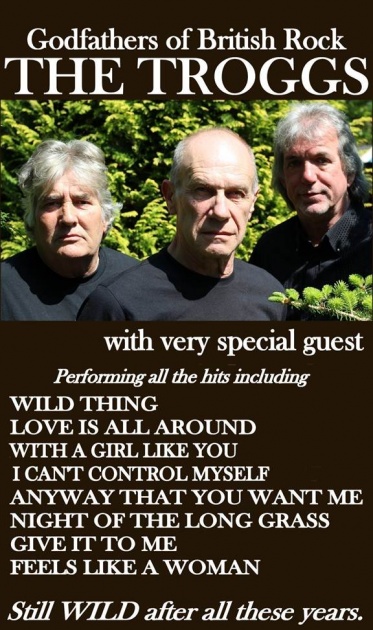 Who can forget "Wild Thing"? The Troggs have always been remembered for this 60s anthem, but it is just one of their many hits. "With A Girl Like You", "I Can't Control Myself", "Anyway That You Want Me", "Give It To Me" and "Love Is All Around". They all followed in rapid succession to give The Troggs world-wide acclaim.

Dubbed by many as the "first British punk band" they have continued playing in their own uncompromising style of good basic rock music. Never strangers to controversy, many of their records were considered by the "powers that be" too suggestive for the masses, and they consequently banned them. The Troggs still boast original founding member Chris Britton on lead guitar, along with Pete Lucas on bass and Dave Maggs on drums and special guest Chris Allen on lead vocals (Ex Denny Laine Band, The Commitments and part time Animals).

Their popularity has never waned and they are still in great demand around the world, where they regularly headline festivals attracting thousands of fans. Their appeal holds no age barriers, fans ranging from the stalwarts who have supported them throughout the years to the many new fans from the younger generation.