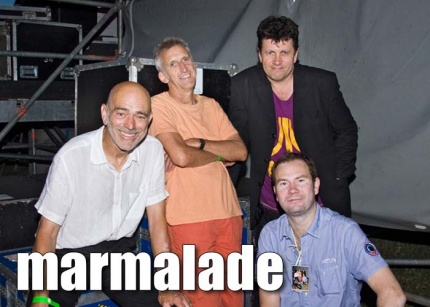 Success in the UK charts kicked off in May 1968 with ‘Loving Things’ which was swiftly followed by ‘Wait for me Marianne’ and ‘Baby Make It Soon’. Then came the ‘MARMALADE’ anthem, an opportunist cover of the Lennon / McCartney song, ‘OB LA DI OB LA DA’. After the success on CBS, ‘MARMALADE’ moved to Decca Records and became the first ‘New Musical Express’ UK chart toppers of the 70’s by knocking off Rolf Harris’s ‘Two Little Boys’ off the number one spot with the timeless ‘Reflections of my Life’.

In 1971, Junior Campbell decided to quit and was replaced by Hugh Nicholson who wrote several more hits including ‘Cousin Norman’, Back on the Road’ and ‘Radancer’. 1973 saw the departure of Hugh, his replacement being Sandy Newman on lead vocal and lead guitar. After three years of touring the world, ‘MARMALADE’ again charted both in the UK and the USA with ‘Falling Apart at the Seams’. Despite several line up changes and a ‘Sex on Tour’ scandal in ‘The News of the World’ newspaper (which caused a little embarrassment at the time) Sandy Newman, along with Alan Holmes, Damon Sawyer, Mike Steed and John James Newman, have blitzed through the generations to the year 2012 with their highly energetic and entertaining performances.

With their unique vocal harmonies and dynamic live performances they have delighted audiences and the record buying public from the mid sixties through to the new millennium on a world wide basis, having achieved multi-million number one selling records with ‘OB LA DI OB LA DA’ and ‘ Reflections of my Life’ both in the UK and the USA respectively. Since the heady days of the sixties, whilst retaining their Scottish roots, ‘MARMALADE’ have proved to be, not only a good time band but a musical entity capable of transcending all types of music and generations.