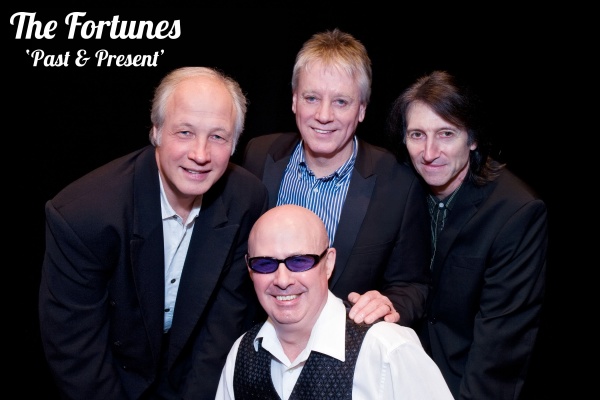 Following on in the wake of Merseybeat, and the R&B of The Stones, etc, The Fortunes added another dimension to the sound of the classic pop song with their special ingredients of sophisticated orchestration, dual lead vocals, and stylish counter-melodies. The result was a succession of distinctive and distinguished hit records including ‘You’ve Got Your Troubles’, ‘Here It Comes Again’ and, continuing into the seventies with more successful releases such as 'Storm in a Teacup' and 'Freedom Come, Freedom Go'.

These songs have stood the test of time, becoming household favourites permanently on playlists everywhere. The Fortunes remain as one of the UKs premier harmony groups, and are constantly in demand worldwide. From the initial success in 1964 of ‘Caroline’, which was used as the signature tune for the influential Pirate Radio station of the same name, The Fortunes had a steady succession of world-wide hits. The Fortunes charted in America in 1970 with ‘The Same Old Feeling’ and again in 1972 with the release of ‘Storm in a Teacup’.

The Fortunes were also the voices for the US Coca Cola adverts (It’s The Real Thing) still to be seen and heard in the US today. Hits in mainland Europe followed. ‘Seasons in the Sun’ and ‘This Golden Ring’ were huge hits in The Benelux Countries. Michael Smitham (guitar) and Bob Jackson (keyboards) Eddie Mooney (bass) and Glen Taylor (drums) ensure the group’s unique blend of harmonies is backed up with a very high standard of musical ability honed by many years of experience. This ensures that The Fortunes’ performances exude class and professionalism. Although The Fortunes’ show concentrates on the hits of Yester-Year, The Fortunes fantastic vocals together with the group’s dynamic musical versatility allows them to stretch their repertoire over a wide range of material; thus giving them the luxury of performing many of the great songs from the beginnings of Rock and Roll to the present day.

As a testament to The Fortunes’ continued popularity you need look no further than to the Gold Disc they were awarded in 1987 for over 100,000 sales of the ‘All The Hits and More’ album. The group remain as popular as ever, and are constantly in demand to do TV and radio shows, along with their live concerts. They recently toured Canada, had shows in Sweden, Holland, Belgium and Germany, cruised on one of Fred Olsen’s liners, and played ‘The Cannery Casino’ in Las Vegas!