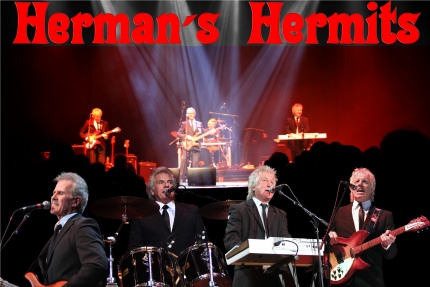 Hit recording stars of the sixties

The mid-60’s music scene was dominated by British Groups, three of which became household names – The Beatles – The Rolling Stones and …..Herman’s Hermits, who are one of the most enduring and successful groups who are still travelling and working throughout the world. From their beginning in Manchester, England on April 1st 1964, the band has chalked up over 23 top twenty single records, 10 hit albums, 3 major movies and countless television shows and concert tours all over the world – up to date they have total record sales of over 75 million.

Since 1971 and the departure of Peter Noone to pursue a solo career, the group has never stopped. Original member, Barry (The Bean) Whitwam, has guided the group from strength to strength into one of the hardest working bands in the business – they still average more than 200 shows per year – and reckon they maintain their stamina by having an amazing sense of humour. Their touring schedule takes them to Germany, Belgium, Holland, Denmark, the Scandinavian countries, Japan, USA, Canada, Australia and New Zealand on a regular basis and still find time to perform in their home country the United Kingdom, packing in the audiences at every venue and delighting them with their solid musicianship, vocal ability and dynamic stage presence. From the Sixties, through to the 21st century HERMAN’S HERMITS are still INTO SOMETHING GOOD.