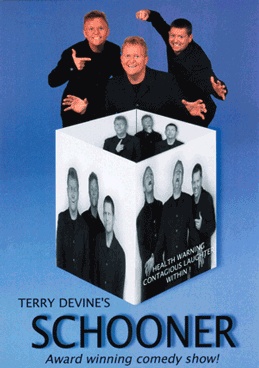 Comedy Acts Schooner
'One of the most professional and talented Comedy Shows in the UK today.' Schooner have numerous credits to their account including network TV appearances for Central on 'New Faces' and Yorkshire on '3-2-1'. Also they have had the honour of being voted by Club Mirror 'Comedy Act of the Year'. Schooner comprises of the very funny Terry Devine, ably assisted by Paul Murdock as anchorman, lead vocalist and bass player. Multi talented Guitarist Paul Moore contributes to the comedy and provides the music with Paul to complete this winning team. Terry's training ground was the renowned 'Hilda Fallon Roadshow' from which such artists as Ken Dodd, Freddie Starr & Keith Chegwin, all emerged. At the age of thirteen he performed his impressions on TV with Freddie Starr in 'Who Do You Do'. Two years later he appeared on screen for seven weeks in 'Junior Showtime'. Schooner originated almost 20 years ago and the act continues to go from strength to strength. They have travelled far and wide and in particular are firm favourites with the Armed Forces and have even performed before Royalty. Summer Shows include Blackpool, Guernsey (x 2), Bridlington, the Isle Of Man (x 3) and numerous tours of Holiday Centres.