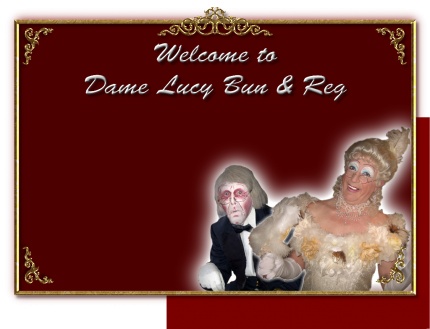 Comedy Acts Dame Lucy Bun & Reg
The Ultimate comedy show,with a unique take on married life. Lucy Bun, who could curdle milk at 50 paces, entertains an audience with hilarious stories of life with her downtrodden husbandReg, who defies death with every breath may look like he sits on the sidelines while Lucy takes the laughs, but will he be the one who ends up stealing the show? The oldest married couple in showbusiness! Since their conception Dame Lucy Bun and Reg have established themselves, both here in the UK and abroad, as one of the most original and refreshingly different comedy acts on the entertainment scene. Having worked in every field from TV, Radio, Theatre and Cabaret, they are considered one of today's leading comedy talents. These triple award winning characters' quirky slant on married life with their particular brand of saucy cheeky charm and 'over the head' delivery is proving to be of great appeal right across the age spectrum and is providing them with an ever growing army of fans. Over in Benidorm, the Costa Blanca's entertainment mecca, they are billed and respected as one of the comedy scenes biggest attractions. On a recent visit to the town, reviewers for the "Clubman's Guide" wrote "...but the act that is packing them in every night is Dame Lucy Bun and Reg, and they are hilarious! Watch out for these two - they are going to be household names!"