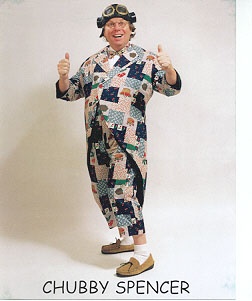 Comedy Acts Chubby Spencer
He's crude! He's rude! He's shocking! He's hilarious! He's Chubby Spencer - the UK's number one tribute to the most outrageous comedian in the world. Like Chubby Brown? You'll love Chubby Spencer. BEWARE: Foul language! Blue humour! Side-splitting jokes! WHO THE **** IS CHUBBY SPENCER? Chubby Spencer is the foul alter ego of the delightfully mild-mannered Ollie Spencer - one of the top comedians on the UK circuit. A stalwart of TV programmes such as New Faces, Tiswas, the Comedians and Seaside Special, Ollie is also a familiar and much-loved face at clubs and holiday resorts across Europe. Much in demand on the after dinner circuit, his comic talents have also taken him to many of the world's most exotic destinations as an entertainer on board the world's most luxurious cruise liners. A true professional, Ollie is extremely likeable and highly amenable - in fact his real personality is completely at odds with the foul-mouthed Chubby.